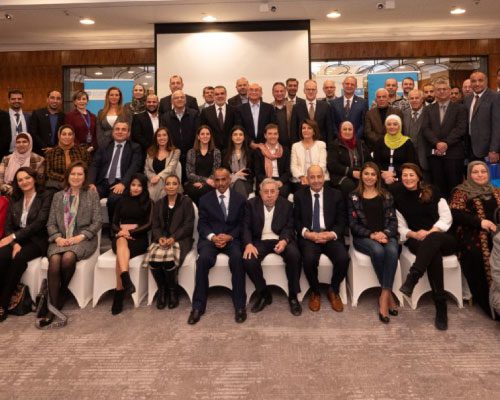 SOS Children’s Villages Jordan held a celebration ceremony in Amman marking the 70th anniversary of the villages’ establishment worldwide with the attendance of partners, major donors and representatives of local community institutions.

In his welcome speech, SOS Children’s Villages Jordan Chairman Elias Baddour expressed his admiration of the organisation’s work on a global level, which started after World War II with the aim of providing support for orphans and children who lack parental care, according to an SOS statement.

He also extended his gratitude to major donors and partners for their support to the association, which has enabled it to provide a “loving home” for children.

The ceremony witnessed speeches by Ambassador of Austria to Jordan’s Oskar Wüstinger, Regional Director of EUCB/SOS International Office Tom Malvit and Director of the Family and Protection Department at the Ministry of Social Development Mahmoud Jbour.

National Director Rana Al Zoubi also presented a briefing about the achievements of SOS Children’s Villages Jordan, noting that SOS has been in Jordan since 1987 providing care for more than 250 children through its three villages in Amman, Irbid and Aqaba and its nine youth centres.

She also stated that in 2020, the association will be focusing on Innovate Alternative Childcare, youth empowerment and funding growth.

The event also honoured major donors, supporters and partners and witnessed the sharing of success stories during a panel discussion with the participation of children, youth and graduates, as well as a mother who has been working in the Irbid village for 20 years.

SOS Children’s Villages Jordan is a national, non-profit organisation established in 1983, and cares for nearly 250 orphans and children who lack parental care in three villages and nine youth centres in Amman, Aqaba and Irbid, according to the statement.